The biostimulant products developed by Symborg improve crop yields and help the environment.

Agricultural biostimulants act on the plant’s natural biochemical processes that are of value to improve crop growth, quality and productivity.

The principles on which biostimulants operate are different from those of fertilizers, highlighting the independence of the presence of nutrients. Furthermore, Symborg’s biostimulant products are compatible with the use of all types of fertilizers. 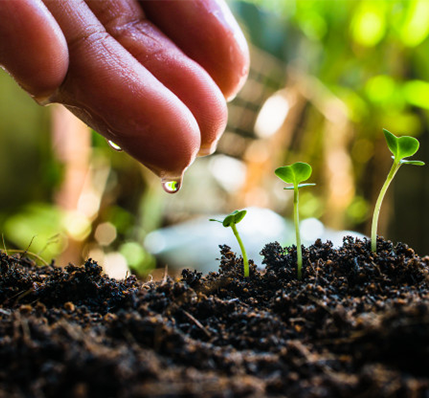 Is the new biostimulant based on amino acids designed and produced by Symborg. It acts as a source of energy to unleash the productive potential of your crops in moments of maximum nutritional demand or in periods of abiotic stress.
Saber más

The use of biostimulants in agriculture is almost as old as agriculture itself. Farmers have always tried to maximize their crops by using natural products that help improve their harvests. Traditionally, biostimulants such as manure, liquid waste or algae extracts have been used.

So, why is everyone talking about agricultural biostimulants now? Are we facing a new agricultural revolution?

In recent years, farmers have opted for the use of microorganisms, granting them better results, since they help both the plant and the soil. The most notable examples of these new-generation biostimulants are the products developed by Symborg.

After years of research, Symborg discovered and patented Glomus iranicum var. tenuihypharum, a mycorrhizal fungus that is revolutionizing the biostimulant sector.

Glomus iranicum var. tenuihypharum is a mycorrhizal fungus. It is a symbiotic microorganism, but before continuing with this, let us discuss its origins.

In the soil, there is life.

It develops mainly in the rhizosphere, that is, the area of ​​the soil near the roots of the plants. It is composed of roots, microorganisms with various functions, nutrients, organic substances and water.

It is in this area where the interaction between soil microorganisms and plant roots occurs, creating an ecosystem conducive to plant development.

There are three types of microorganisms:

As stated above, Glomus iranicum var. tenuihypharum is a symbiotic microorganism. The plant provides the indispensable sugars for its survival and the fungus, in turn, provides the plant with nutrients and water. These are the basic elements for the biostimulant activity.

Such symbiosis is called mycorrhizal symbiosis, and it is the basis of the biostimulant effect of the products developed by Symborg.

WHAT ARE THE BENEFITS OF BIOSTIMULANTS BASED ON GLOMUS IRANICUM VAR. TENUIHYPHARUM?

Agricultural biostimulants based on Glomus iranicum var. tenuihypharum have the following characteristics:

The extramatrical mycelium is the vegetative part (hyphae) that mycorrhizal fungi produce. This mycelium is created in the soil surrounding the roots.

Biological products based on Glomus iranicum var. tenuihypharum produce a greater amount of extramatrical mycelium, which ensures a better exploration of the soil. Thanks to this, a greater supply of nutrients and water from the soil to the plant is achieved.

SPORULATION HAPPENS OUTSIDE THE ROOT

What does fungal sporulation mean? Spores of a fungus such as Glomus iranicum var. tenuihypharum, which is mycorrhizal, contain part of the fungus’s genetic material, which then germinate and produce a hypha (microscopic filament, branched or not, which, along with other microfilaments, forms the vegetative body of the fungus, also called mycelium), which colonizes the plant.

In a nutshell, the process of external root sporulation refers to the fungus’s process of reproduction and colonization of the plant.

The advantage of this reproduction process being external to the root of the plant is that there is no break in the root’s continuity. In this way, the plant produces more roots and maintains a greater absorption of nutrients and water on a continuous basis

IT IS COMPATIBLE WITH ALL TYPES OF FERTILIZERS

This type of biostimulant shows a high resistance to saline conditions. This is why it is very effective in soils with high electrical conductivity while perfectly integrating into all intensive agriculture fertilization protocols.

HOW DO BIOSTIMULANTS HELP MY HARVEST?

Biostimulants based on Glomus iranicum var. tenuihypharum cause the following crop improvements:

WHAT ABOUT THE RESULTS?

The result of using Symborg biostimulants based on Glomus iranicum var. tenuihypharum is an increase in yield and crop quality, as well as an improvement in the chemical, physical and microbiological properties of the soil.

BUT WHAT ARE THESE BIOSTIMULANTS?

The biostimulants that Symborg has developed are: MycoUp, MycoUp 360, Resid MG (for corn and grains), Resid HC (exclusive for seed coating) and TrichoSym Bio.

You can visit their product pages to find out in detail the keys about the uses and applications of each one of them.

You can also contact us for further information. One of our experts will personally manage your request to solve all your doubts.